Greetings Everyone!
I am proud to announce the addition of not one, but two brand new shows for middle and high schools for this upcoming school year.  With that being said, these programs are also available from March-May of THIS school year at a special rate for folks who would like to see an early version of either program!  Several schools from October/November have seen previews at the end of their "Authors of Mystery and Horror" programs of the first program below.  A special "thank you" to everyone who allowed me to "practice" in front of their students and teachers that were in attendance - it was the best practice I could get! 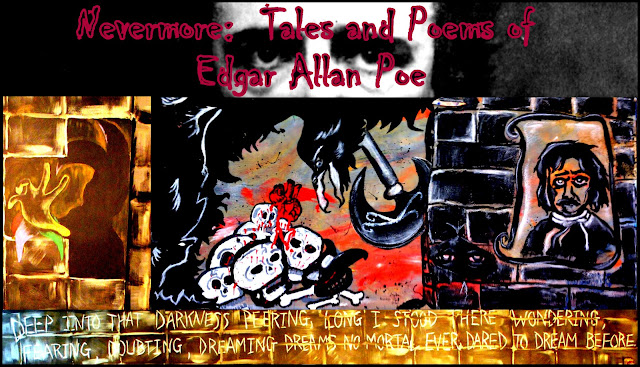 "Nevermore:  The Tales and Poems of Edgar Allan Poe" is a truly unique experience.  This program is not just a summary of Poe's works followed by some awesome magic.  Students and teachers will experience dramatic tellings of Poe's stories and poems from memory!  Some of the stories and poems that are performed at this time are "The Raven", "The Tell-Tale Heart", "Annabel Lee" and "A Dream Within a Dream."  "The Cask of Amontillado" will soon follow.  Between the stories and poems will be some strange and mysterious magic routines that are sure to astound and tie in with the themes of each piece of literature.

Due to popular demand and per the request of several media specialists at the middle school level, I am most excited to introduce "Once Upon a Time:  Grimm's Fairy Tales."  This program highlights the differences between the modern day adaptations of several popular fairy tales with their original counterparts.  Students will be delightedly shocked at some of the "new" twists that they experience when going back to the beginning - when the Brothers Grimm were writing down these stories so long ago.  Some of the featured fairy tales are, "Cinderella", "Snow White", "Beauty and the Beast", "Rumpelstiltskin", and "The Frog Prince."  Others that will be mentioned are "Sleeping Beauty" and "Rapunzel."  As always, between each story will be some amazingly mysterious and enchanting magic - because these are fairy tales after all!
Posted by Chad Crews at 4:47 PM