The Summer is Over!

Hello Everyone,
It has been a long time since I posted a blog. Life is busy with church, shows, and my little girl, who is walking very well now and growing even faster it seems! The summer library season has just gotten over and I am enjoying being at home with no shows for two weeks in a row - then it's back to work with school shows the rest of the school year! I am including a picture of a Madagascar Hissing Cockroach - these are in my "Catch the Reading Bug Safari Show" this year. 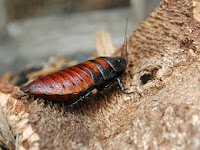 I now have around ten of these little guys and gals. The cool part is that they can have around 30 babies at a time and they can do that every couple of months! So, I'm looking forward to when they start reproducing and I can feed them to my tarantula's and scorpions! No more buying crickets at the pet store!

I'm looking forward to another year of school shows - especially the "Authors of Mystery and Horror" program, both version 1 and version 2! That show takes up pretty much all of my October and most of November, and last year lots of January also! But it's a fun show to perform!

Well, that's all for now - I can't wait to see everyone this upcoming school year and thanks to all the librarians this summer who had me perform for your summer reading programs - I had a great time and I met some great parents, librarians, and children!

Greetings one and all,
I am just getting home for the South Carolina Early Childhood Conference where I had the opportunity to perform for several kindergarten classes as well as lecture to several educators. I had a great time and want to say "hello" to any who went to the lecture that might be reading this. If anyone has any questions about the magic routines/tricks that you learned about, don't hesitate to ask!

Well, on to the second part of the blog title, "New Additions." One the way home I stopped at a Burger King to get a healthy meal consisting of a classic chicken sandwich, a medium fry, a sprite and then a lovely chocolate milkshake. As I was leaving I saw a sign for a pet store called "Pet Safari" so on impulse I turned in - for those who have seen my elementary reading show, you know I like strange animals! As it turns out, the store had recently gotten in two new critters that I just happened to be searching for for the upcoming show for this summer and next school year for the "Catch the Reading Bug" theme. What were they you ask? I'm glad you asked, I'll tell you - they were two large Madagascar Hissing Cockroaches! I quickly bought them both and am now pleased to announce the addition of the two newest members of my magical safari friends.

They are quite friendly and make a lovely hissing noise when you touch them on the back! Very cool! It sounds very much like a snake. Right now they are moving around in there little box and probably eating the carrot that was placed in there - yes, carrots are their most favorite food!

Pictures will be posted shortly! Everyone have a great day!
Chad
Posted by Chad Crews at 10:43 PM 3 comments:

Greetings once again blog readers!
As many of you know I travel all over the place performing at schools and libraries. I consider something an hour away as "close." With all that time in the car, one must come up with creative ways to stay awake during those early morning drives and late or slow afternoon trips home. I have come up with several ways to stay awake and I shall now share them with you.

1. For early mornings, my first defense is breakfast. I eat while driving, so as soon as I feel tired it's time to go to the nearest McDonald's drive-thru.
2. After breakfast, there is the snack food - which, 99% of the time, is pop tarts.
3. Finally, once those two options are exhausted, you can try the radio - but that depends on whether you are in the middle of nowhere.
4. Last, it's time to bring out the secret weapon that works any time of the day and any day of the week - sunflower seeds. No, not the ones that are already out of the shell, but the ones in the shell that you have to work at to get open and then you spit out the shell into a cup or empty water bottle. Yes, it will keep you awake and active. I have actually gotten full on sunflower seeds before - and it takes a lot. They come in different flavors, bar-b-que being one of my favorites, but also including sour cream and onion, original, salsa, and I'm sure there are others.

Of course, during the summer, I have my assistant and cousin, Morgan, to drive for me so that I can go to sleep - then we swap off. Although sometimes her driving makes it difficult to go to sleep - but don't tell her that - I already have!

So there you have it - yet another aspect in the life of the educational entertainer.

An extra note*** Today I was in White County performing and saw snow and several snowmen in people's yards. We here in Augusta had no accumulation, but it was nice to see some snow on the way to the show! Thankfully school was not cancelled!
Posted by Chad Crews at 9:48 PM No comments:

Here are some more pictures from my show in Alma, GA. They were taken by the media specialist there, Ms. McDonald. I thought they would give everyone a good laugh - no one can say that my show is low energy! Both the students and the teachers were a great audience and even better volunteers! If any of you who are reading this have pictures from a show - feel free to email them to me and I will definitely post them for your viewing pleasure!
Posing with my "strong" volunteer 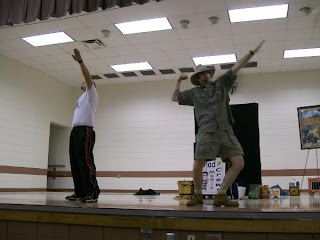 My volunteer using all his strength to strap me in 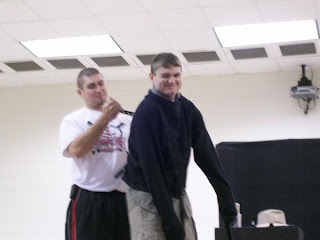 Me using all my strength to try and get out in time! 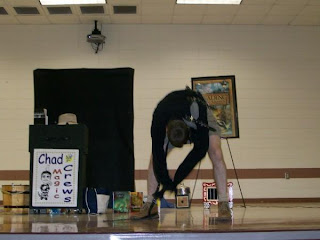 It has been said that I should have been a sumo wrestler.... 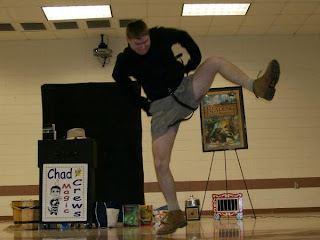 So, if you want a high impact, no holds barred educational extravaganza - now you know where to find it - right here.

Have a great day everyone!
Chad
Posted by Chad Crews at 9:15 PM No comments: 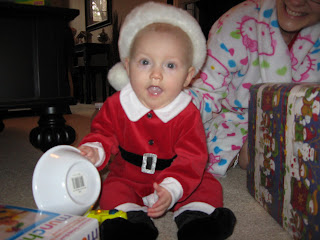 Her Hello Kitty bowl was her favorite Christmas present! She ignored the rest!
Well, I hear Reagan waking up right now - so this blog must come to an end!
Stay tuned for some hilarious pictures from an elementary show down in south Georgia!
Have a great day!
Chad
Posted by Chad Crews at 11:41 AM 1 comment: