Greetings All!
As I arrived at a middle school a few days back I couldn't help but notice that the students who were being dropped off look rather unique.  There was Dorothy from the Wizard of Oz, several black cats, Raggedy Ann, cowboys and cowgirls, Superman, Batman, Captain America, Sponge Bob, and many others getting out of vehicles and coming inside the building.  Upon further inquiry, I found out it was "Character Day."  It was also pep rally day, teacher appreciation day, and possibly some other type of day that I am forgetting.

I really knew it was a special day when I walked into the media center and, instead of finding the media specialist, I found Thor waiting on me!  I then made the mistake of telling Thor to "put the hammer down."  This is what happened after that: 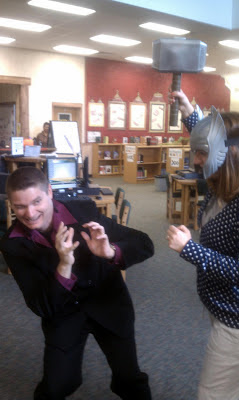 It was a blast performing there all day and being able to get kids excited about seeing the classics.  Of course the best part was seeing all the awesome costumes during the shows.  I was assisted by the aforementioned characters as well as a nun, a princess, a hunter, and a ghost buster in full costume!  Here's a brief sample of a few of the cool folks who helped in the program! 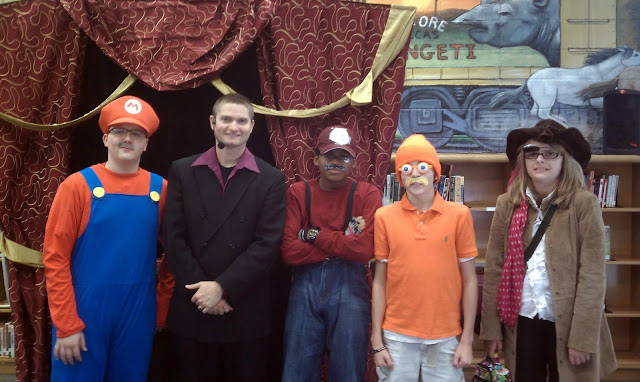